“To photograph is to hold one’s breath, when all faculties converge to capture fleeting reality. It’s at that precise moment that mastering an image becomes a great physical and intellectual joy.” — Henri Cartier-Bresson

From the moment I saw my very first Henri Cartier -Bresson image I was hooked… Instantly I fell in love with his images and then with this genre. His images have a timeless quality to them, they are beautiful, magical and surreal..
Henri Cartier -Bresson is commonly known as the Father of Street Photography, and coined the phrase ‘The Decisive Moment’ which he describes in this quote.  ‘To me, photography is the simultaneous recognition, in the fraction of a second, of the significance of an event as well as of a precise organisation of forms, which gives that event its proper expression’… So it is about both timing and composition.

Henri Cartier -Bresson favoured one Camera and one Lens. A Leica with a 50mm lens was his favourite combination for many years, so that his camera became intuitive, the camera became an extension of himself, and didn’t get in the way of his creativity. In this way he could capture the split second or decisive moment in which the action in his image unfolds.

He was invisible, he kept a low profile and remained unobtrusive so he didn’t interrupt the flow of the action. 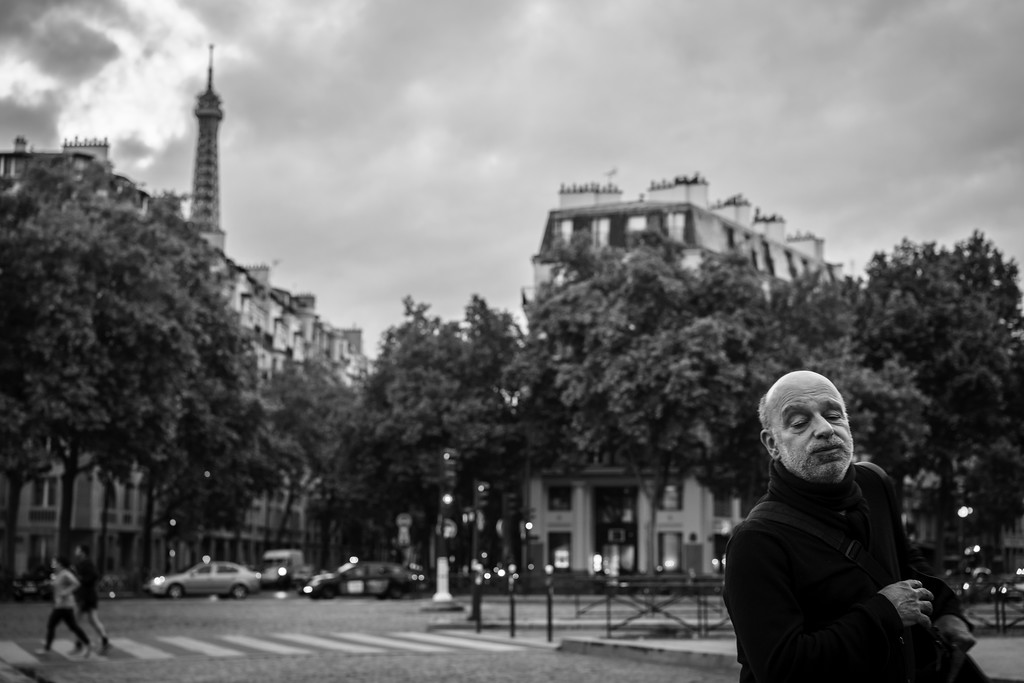 This image is my example of the Decisive Moment, it was taken late in the evening in Paris. This man had an interesting face, he was pacing backwards and forwards looking out for his bus to arrive. I focused on his back and waited…. as he turned I captured his expression, that looks to me like exasperation.. What I like most about this image is that it is unique, it captures the everyday life on the Streets of Paris and the Eiffel Tower which is such an iconic landmark.
Cartier -Bresson images also convey a strong sense of geometry, he composes his images more as an Artist than a photographer. He uses lines and shapes etched out with shadow and light. Squares, triangles, rectangles and circles/ curves add to the abstract quality he embodies.

Shapes in his images are made from his subjects as well as his environment. You will see the triangle created by legs in the image above is a recurring theme in his work, and he often used leading lines to add impact to his subjects and frames within a frame.

He is a big fan of the Fibonacci principle which has been generalised to the ‘Rule of Thirds’ and he often placed the focal point in his images in the dissecting triangles. But more on that later…

It is an important exercise to look at the Masters of Street Photography like Henri Cartier -Bresson, to see the history and evolution of this vast genre. Click on his name to see his exceptional body of work.

If you are new to Street Photography there are vast amounts of free resources that will guide you through the elements and principles of composition. I do not intend to cover every aspect here so advise you to firstly take a look at Marie Laigneau who has a free ebook on Creating Impact-The Fundamentals in Storytelling in Street Photography.. Also Eric Kim   free ebook The Street Photography Composition Manual both are well set out and has some excellent information. It is where I started just over a year ago.

Who is your favourite Street Photographer and what resonates with you? Any thoughts feel free to leave them below.